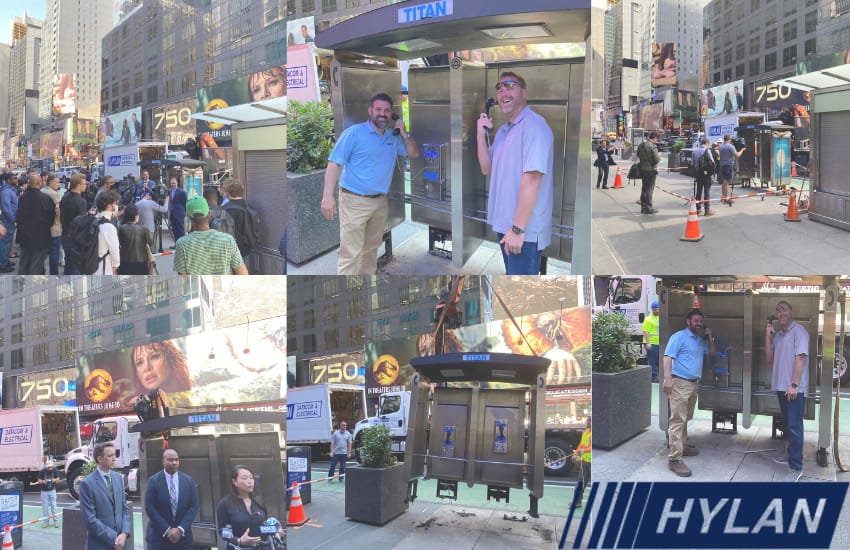 In the Golden Age of comic books, phone booths were the vessels in which Clark Kent morphed into Superman with lightning speed, and they were a staple on street corners across the nation. However, since the peak of 2.6 million public payphones in the mid-1990s, this omnipresent communication infrastructure has been on the decline. The phasing out of payphones is due in part to the infiltration of mobile phones, and to the perceived crime that was associated with public phones.

Today, advances in technology have made public phones virtually obsolete, and in New York City today, the chapter was closed on payphones as the city’s last phone booth was removed from a Midtown Manhattan street corner. Over the past seven years, Mayor Bill De Blasio’s administration began replacing public payphones with Wi-Fi kiosks known as LinkNYC, and Hylan is proud to have played a part in this important initiative.

The project will expand 5G access and bring free high-speed Wi-Fi and other critical services to more New Yorkers in more neighborhoods across the city. The initiative is part of the largest free public Wi-Fi network in the US and is a huge step toward narrowing the digital divide.

Although phone booths conjure up memories of Clark Kent as the caped crusader, it’s a new day, and in our minds, the 5G era has created its own ‘Hylan Heroes.’ Thank you to all our teams for your support, with a special shoutout to John Gambino, the Director of Civil / Underground Utilities NY/NJ/PA and General Super of NYC Field Operations for our Hylan Datacom & Electrical division. Thank you, John and team, for your amazing work and dedication to this important initiative.